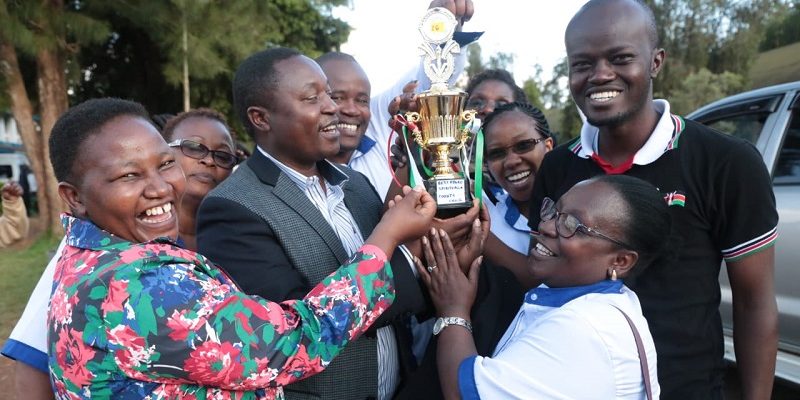 The Makueni county choir was crowned  overall winners in the 92nd edition of the Kenya Music and Cultural Festival held in Meru after making its first appearance at the national level.

The county choir, which had registered  in two categories for presentation took the lead with the song “Ain’t That Good News,” of class 435 Negro Spiritual category, beating other several county choirs competing in the class.

According to the gender, children, culture and social services executive member Dr Godfrey Makau who had accompanied the team during the festivals, it was a big surprise for the choir to emerge winners owing to the fact that it had just made its first entry for the competitions.

“Amazingly, the choir appeared for the first time at the national level during the 2018 Music and cultural festival and emerged overall winners. It was a big surprise to all of us!” Dr Makau exclaimed.

However, the win didn’t come easy, according to Pius Mutinda who is the vice- secretary, Eastern Regional Music Festival and one of the choir trainers, adding that the members sacrificed their time to perfect the items for the competition.

He said: “The group, as young as it is, was able to register a superb performance. However, they sacrificed their time to polish and compete favorably, which they did.”

The 92nd edition of the national festival, which ran from November 23 to 29, attracted over 30,000 participants from across the country.

The group, established in July this year has 42 members comprising of county staff and members of the public drawn from various wards across the county.

The county director alcoholic drinks control, Joseph Katumo who is also the second trainer said that the team was formed to among others nurture talents in arts, sensitize the public about the government programs, create awareness on social issues within and without the county and promote national and county cohesion through diverse cultural practices, sentiments which were echoed by Dr Makau.

The choir has since received several invitations to perform in various events, and was applauded by the Country First Lady Margaret Kenyatta for its awesome presentation when she graced the official commissioning of the county Mother and Child Hospital in Wote.

The county government is set to officially commission the choir during the county prayer and thanksgiving ceremony to be held on 31st this month, an event which will be graced by governor Kivutha Kibwana.