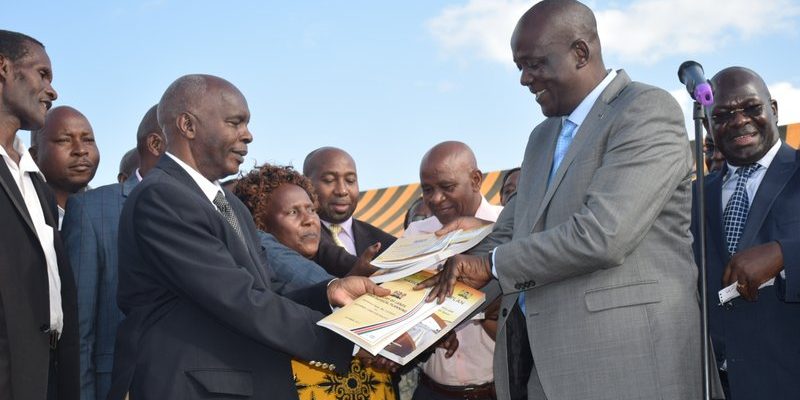 The National Government will work with the County to expedite the issuance of title deeds in order to address land ownership problems in Makueni County.

Governor Prof Kivutha Kibwana and Chief Administrative Secretary (CAS)  for Lands Gideon Mung’aro said the two levels of government have resolved to work together to deal with the problems affecting thousands of residents in Makueni who own land but have struggled for years to access documentation.

“We have people here who own huge chunks of land. They have owned such land for years but have never acquired land titles,” Prof Kibwana said.

The governor and the CAS were speaking at the ATC Kwa Kathoka in Makueni where they joined hundreds of delegates in the county’s first Annual Land Conference.

He said the county recently launched a programme to support the issuance of 53,000 titles to locals as part of his government’s strategy to iron out the outstanding land problems in the county.

Prof Kibwana said: “The trouble here is that majority of people facing problems with land documentation are also very poor people who cannot afford the prohibitive charges being levied.”

He said landlords in most of Makueni’s urban areas are unable to access financial facilities using land they own as they don’t have official ownership documents.

The governor also decried land grabbing menace by powerful individuals and appealed to the ministry of lands to help reclaim a piece of land grabbed from the Makindu stadium by a senior public officer.

“Someone has grabbed land in Makindu.We have even written to him as county and he goes bragging that we are a small entity and therefore we can do nothing. The government should help us reclaim the grabbed piece of land,” Prof Kibwana pleaded.

Speaking at the event Mr Mung’aro ordered the ministry staff to work with their county colleagues to ensure reclamation of the Makindu stadium land.

“We will send out officers on Monday to look into the grabbing of the stadium. At the moment we don’t tolerate such acts, no one is allowed to use their big offices to execute grabbing of public property,”Mr Mung’aro said.

Mr Mung’aro also warned corrupt land officers that they will be dealt with ruthlessly following complaints that some were demanding bribes before offering services to the public.

“We have had complaints about some of our officers. I want to summon all of them to come to Nairobi on Monday, so that they can share with us what their problems are,” the CAS said.

He announced that the national government will in the next three months issue an additional 67,000 land title deeds to residents of Makueni County who have for long lived as squatters in their own land.

Ngai Ndethya, Ngiluni, Mbetwani, Kiboko A, B and C are among some of the settlement areas with major outstanding land problems that have hindered issuance of titles for years.

“We have held quite a number of clinics.We do believe that the conference we have had today will in a way resolve some of the problems we have faced  even if not all,”Mr Wambua said.

Several land sector reform experts led by the Chief Executive Officer of the Kenya Land Alliance Odenda Lumumba were among speakers at the event.