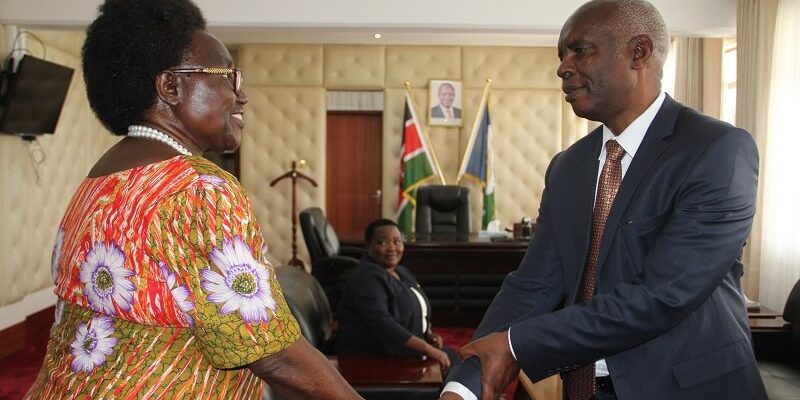 A delegation of Uganda Members of National Assembly has hailed the Makueni devolved system of governance saying it has led to effective delivery of services to the citizens.

Cecilia Ogwal, who led the delegation on a 3-day benchmarking tour to Makueni observed that though Uganda has a devolved system, the public participation is not functional and resources are not devolved.

“We have read about Makueni and its success stories and that is why we chose to come. However, in Uganda, we have a devolved system up to the districts level but participation of people is not functional, and also the resources are not devolved,” she said.

Governor Prof Kibwana said that it was an honour that the members of the Ugandan Parliament chose to bench mark in the county to learn noting that counties have been learning from each other to enrich their work.

Governor Kibwana further explained to the delegates who paid him a courtesy call in his office on Wednesday, that his government is keen in actualizing article 1 of the 2010 constitution of Kenya which resulted to the institution of the peoples’ government in the county.

The governor also observed that the sovereignty of the people in the county had worked through the public participation model but noted that sometimes it is resisted by leaders who feel threatened by empowered citizens, adding that it requires a lot of transparency.

He said: “Here in Makueni, we believe in actualizing the constitution and that is why we instituted the peoples’ government to implement Article 1 though sometimes it resisted by some leaders. Despite the challenges, it has worked.”

Ogwal noted that the benchmarking tour was aimed at comprehending the devolved system structures and functions before making concrete recommendations to the government of Uganda.