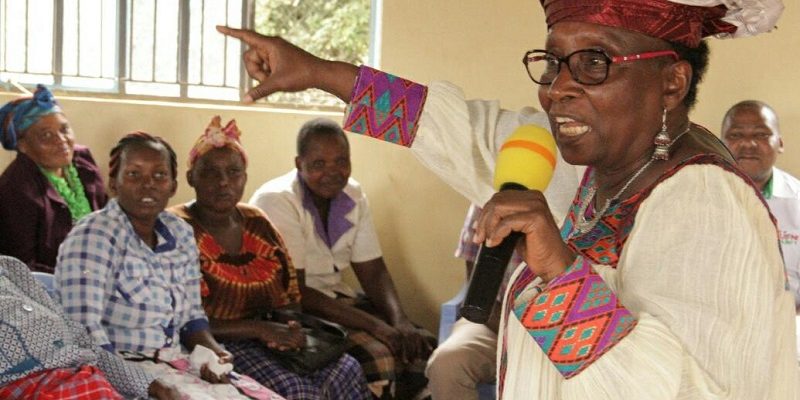 Makueni deputy governor Adelina Mwau has  warned gender based violence perpetrators in the county saying stern action will be taken against offenders to fight the vice.

Mwau spoke at Unoa grounds where she addressed a women conference convened to discuss gender mainstreaming, women’s financial stability and healthcare among others.

The county had partnered with Musyi FM a Nairobi based vernacular radio station   to organise the event that brought together women from different spheres of life.

The deputy governor regretted  that incidences of violence against women had become  rampant in Makueni terming such acts unfortunate and barbaric.

‘’We are witnessing a lot of defilement and rape cases across the county. This is disheartening and no woman or child deserves to be violated,” Mwau noted.

She repeatedly quoted a recent case where a 77-year-old woman was raped by her 24-year-old grandson.

Mwau thanked police for moving with speed to apprehend the suspect and expressed hope the judiciary will be swift in dealing with the matter.

She urged women not to hide incidences of defilement and incest involving their husbands adding that it was hurting the battle to win justice for the victims.She urged the security apparatus to take action against those hiding such criminals.

‘’What are you still doing with a husband who defiles your daughter and impregnates them?,’’ She posed.

She continued, “ You deserve a legal action and no mercy should be shown to you. You are badly tormenting those young girls.’’

‘’Our people need more education on measures they should take incase such barbaric acts are committed against them; the county has done a lot but we still need to reach out to more people,” Dr Makau noted.

At the same time  deputy governor announced that her office is keen on promoting women’s participation in leadership, decision making, advocacy as well as implementation of strategies geared towards empowering the woman.

She also said that the county has an already existing revolving fund that has been benefiting organized groups such as women, youth, men and PWDs since 2016.

‘’This interest free loan has achieved a lot so far in empowering these groups economically and soon we will introduce a Nzangule ya Matangi loan so that the county realizes its CIDP rain water harvesting plan’’ Mwau reported.

Makueni MP Daniel Maanzo appreciated the office of the deputy governor for championing the gender affairs, adding that Mwau has been on the forefront in the fight against gender based violence.