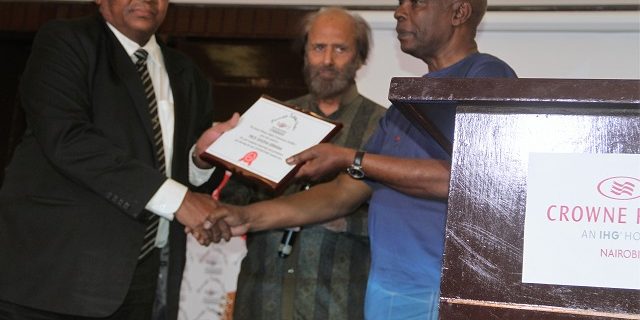 Makueni governor Kivutha Kibwana has been honored by the Kenya Human Rights Commission for his outstanding performance, reformist agenda and fight for human rights in the country.

Together with Zarina Patel an environmental activist, cartoonist Godfrey Mwampembwa (GADO), John Nottingham a former colonial District Commissioner the four were recognized and awarded by the human rights body during its 25th anniversary dinner in Nairobi on Wednesday.

The implementation of model public participation system by Prof Kivutha Kibwana’s government in Makueni County was also cited as reason for the honour.

Prof Kibwana was described as a top performing governor due to the reforms he has introduced in his county.

“The Makueni governor has introduced reforms revolving around the implementation of free universal health care, issuance of title deeds and the introduction of processing plants to better accommodate the work of mango and milk farmers.” read a citation by KHRC on Prof Kibwana.

The Makueni governor’s previous work at the National Convention Executive Council, where he pushed for constitutional reforms and national dialogue in the 90’s also contributed to his award as an outstanding reforms champion.

While accepting the recognition, the governor said he dedicated the award to the people of Makueni, who have shaped their government to great heights through participation in the county’s development agenda.

“During the making of the 2018-2022 County Integrated Development Plan, over 120,000 people out of a population of about one Million took part through public participation forums. It is the People’s contribution towards development that has brought us to where we are.” he said.

Kisumu Governor Prof Anyang Nyong’o who was present hailed Prof Kibwana for his achievements as governor adding that his exemplary performance was admirable and record setting.

“When I grow up. I want to be like Prof Kibwana. He has set the record which all governors must follow,” Prof Nyong’o said.