Kibwana urges Uhuru to be firm in war against graft 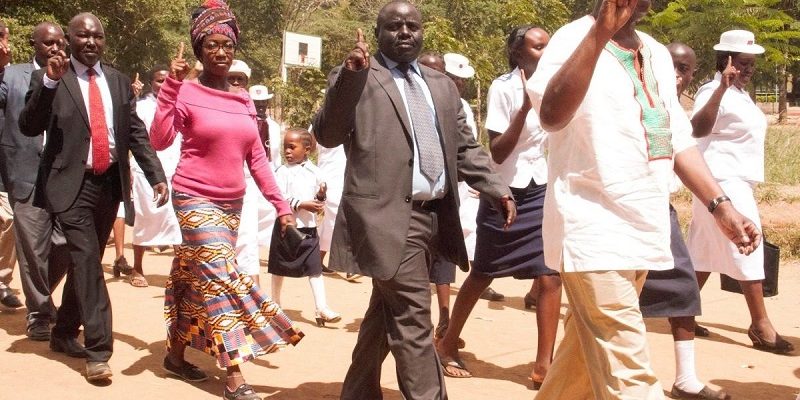 Makueni Governor Prof Kivutha Kibwana has lauded President Uhuru Kenyatta’s firm position in the war against corruption and urged him on saying the vice must be eradicated.
The governor said the President has personally maintained high integrity in public life and urged him not to relent in the war against the vice.
Prof Kibwana known for strong governance credentials urged the President not to spare efforts to crush corrupt networks in his government warning that they may derail efforts he has made to develop the country and water down the good legacy he was developing.
“The President of this country has not been mentioned in any incident of corruption. We are also happy he has promised to strictly fight the vice,”Prof Kibwana said.
President Kenyatta has already ordered thorough investigations into a number of recent scandals and asked relevant agencies to prosecute masterminds.
Prof Kibwana also said that ethnicity is a major threat to the country’s economy saying that it must be dealt with in the same veil as corruption.
“Tribalism has become widespread in the country we need to ask God for forgiveness for corruption and tribalism,”Prof Kibwana stated.
He said that billions tapped by corrupt networks would help stabilize the economy if Kenya achieved a corruption free status.
“Theft of public resources has become so rampant in our country,we must combine forces to deal with corrupt people in our midst,” the governor said.
The Governor was speaking on Sunday at Makueni Boys High School when he joined Salvation Army faithfuls during the Kenya East Territorial self-denial ingathering conducted by territorial Commander Commissioner Henry Nyagah.
Commissioner Nyagah lauded Prof Kibwana and his government for involving the church in his leadership saying the church was one of the key stakeholders in matters development.
“I would like to appreciate Governor Kibwana and his government for working closely with the church. I am happy to say that I have met with his deputy Adelina Mwau and some of the Makueni Ward representatives in church functions. I know they love the church,” Nyagah stated.
Other top government officials present were Executive Committee Members Bob Kisyula (Water),Lawrence Nzunga (Agriculture) and Eng Sebastian Kyoni (Transport).
Share
Share on FacebookShare on Facebook TweetShare on Twitter Share on WhatsAppShare on WhatsApp