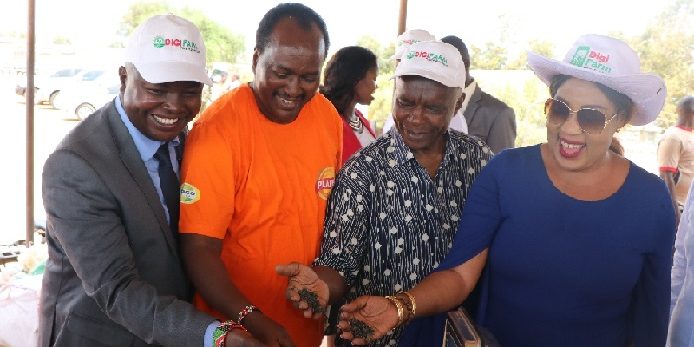 Thousands of Makueni farmers are looking at better days growing sunflower with a ready and almost insatiable market provided by Bidco company limited.

Through contract farming, Bidco has partnered with Makueni County and Safaricom through use of a mobile based app, Digifarm, through which farmers get agronomical advise, credit facilities and all the necessary extension services on their mobile phone.

The journey towards sunflower production in the County began in November 2018 when Bidco through DigiFarm Contracted 640 farmers to plant the crop as a pilot project.

Purchase of this produce was flagged off at Kathonzweni by governor Kibwana, Safaricom’s Director of Enterprises Business Rita Okuthe, and Bidco head of Agribusiness John Kariuki on Thursday.

Kariuki announced that Makueni has been identified as a model county for sunflower seed growing in the country where those aspiring to venture into the business will come for bench marking.

Out of the 10,000 metric tonnes of sunflower seeds demand by Bidco annually, Makueni has been allocated a 2,000 quota by the company, a motivator to the local farmers to take up its production.

To spur uptake of the crop, Kibwana has said that the county has recruited 75 extension officers trained on using the Digifarm platform in farmer service delivery and equipped with 75 mobile smart phones to enable adoption of the platform by the extension officers.

Another 33 tablets have been sourced for supervisors.

He said begining March, the county has kicked off Soil testing activity at a subsidized cost of Shillings 300 to the farmers. The soil test gives a detailed report after 5 minutes.