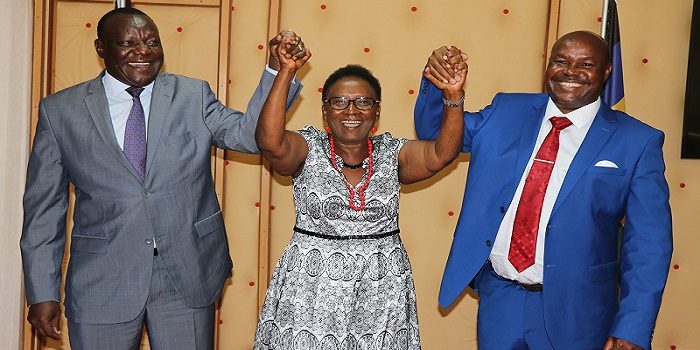 Deputy Governors Adelina Mwau, Eng Francis Maliti and Dr Wathe Nzau have pledged their unequivocal support for the Poverty Eradication Movement formed by the three Ukambani governors saying it is the only sure way to better the lives of their citizenry as well as accelerate the intentions of South Eastern Economic Bloc (SEKEB).

The three Ukambani DGs on Monday when they addressed the press at Maliti’s office in Machakos noted that the three counties share a lot in common but genuine unity to solve their unique challenges have been missing.

In a joint statement, the DGs further observed that it is only through the unity of purpose that the people of Ukambani can realize the goldmines they have been sitting on over the years and urged the three governors to soldier on.

“We are talking of building into each other’s efforts. For example, we are talking of Kalamba fruit processing plant in Makueni and we can have all Ukambani fruits processed there. We have a lot to learn about the Kitui Ndengu revolution. We are not duplicating but building on each other’s comparative advantages,” Mwau said.

“The initiatives through SEKEB the three governors have come up with are very good. We must change the way we used to do things if we are to expect different results. We also support the religious leaders who are trying to bring the leaders together. We need leaders who can bring our people together for politics of development,” said Nzau.

The deputy governors have lauded their bosses for choosing a direction away from the status quo and for reviving SEKEB which they said will concentrate on the following issues;