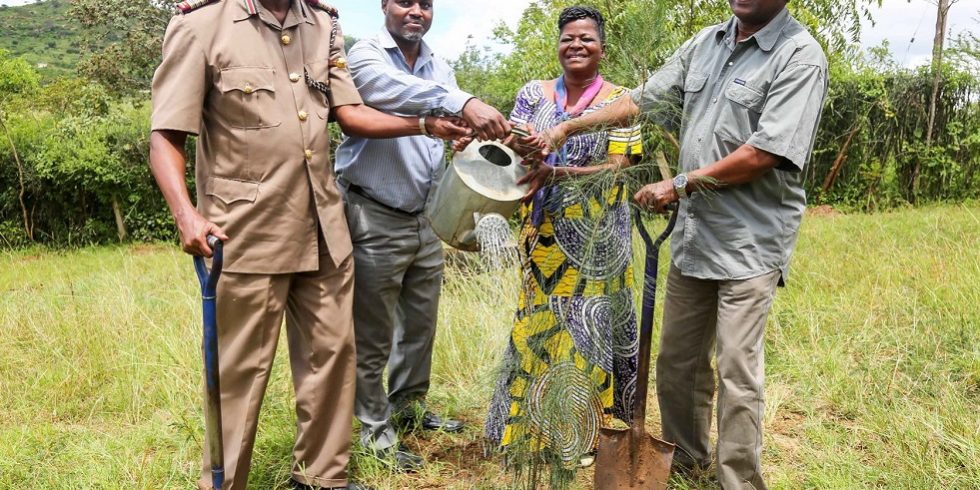 He said the irregular harvests had led to the decreasing woodlots making Ukambani a victim of harsh climatic situations during both rain and sunny seasons.

The PS said that unsustainable harvesting of wood has led to degradation of forests causing the escalation of deforestation, increasing Green House Gas Emissions and land degradation.

He also indicated that water catchment areas are also drying up and timber and charcoal are becoming very expensive.

“We are cutting trees more than we are planting and this has caused several effects like degradation of forests and drying up of water catchment areas,” Dr Muia said.

The PS spoke during the Makueni county afforestation drive at Nduundune primary and secondary schools in Emali.

The Planning PS was accompanied by the county First Lady  Nazi Kivutha,officials from Kenya Forestry Service and  several representatives from  various development partners who also  took part in planting approximately 30,000 trees in the area.

Dr. Muia further indicated that the county is in arid and semi-arid zone of Kenya and proposed the initiation of a sustainable Citizen Centered Afforestation and Conservation Initiative that will encourage every village to have a big tree nursery as well as support watering and caring.

“We all know that Makueni is not favoured by climate therefore it is important for us to innovate an appropriate program that will support afforestation despite the foregoing weather challenges,” said the PS.

Nazi who also took part in the drive called upon everyone and especially pupils to plant trees on annual basis revealing that together with Governor Kivutha Kibwana they had already planted 800 trees in their home during the current wet season.

“I urge all our pupils to treat trees as their pets and plant a tree every year. The governor and I have planted 800 trees this season,” Nazi stated.

Her sentiments were echoed by Makueni County Commissioner Mohammed Maalim who also present at the event saying that together with the county government they had already planted 160,000 trees in the county.

Other County officials who took part in the drive include executive committee members for water and roads, Robert Kisyula and Eng. Sebastian Kyoni respectively and chief officer for natural resources and climate change Mary Mbenge.